The 8-bit Programmable Computer illustrates how a hierarchy of macro blocks can easily manage large designs using primitive, MSI and other macro parts.

A brief description of each of these nine macro blocks follows.  Schematics of all macros are in the Logic Design Draw/Logic Simulator Examples: Computer "Macro Schematics" directory.

The Timing block contains an oscillator and a divide-by-5 Johnson counter.  Six timing terms, A -A  B -B C -C, are provided to sequence control logic.  For the 8-bit Computer, only A and -C are used.

The operational sequence of each computer instruction is:

a. The Instruction Register latches the Read-Only Memory output and the Program Counter is incremented or loaded

c. The output of the Program Counter provides the Read-Only Memory address for the next instruction

d. The Read-Only Memory outputs the next 20-bit instruction

The Program_Counter (PC) is an 8-bit counter which sequences up to 256 computer instructions in the Read-Only Memory.  Normally the PC starts at a count of 0 and increments after each instruction is executed.  For Branch/Jump instructions, the PC is loaded by the Branch address.

The 256-word by 20-bit Read-Only Memory consists of (5) 256x4 ROM4 parts and contains the computer program.   The data in these ROM4 parts must be defined before simulation.  To change the program, the Read-Only Memory circuit must be edited and the macro must be rebuilt.

Currently there is only a 10-word program in the Read-Only Memory:

For each instruction cycle, the Instruction_Register latches the instruction data from the Read-Only Memory.

The Instruction word format is shown in the following figure: 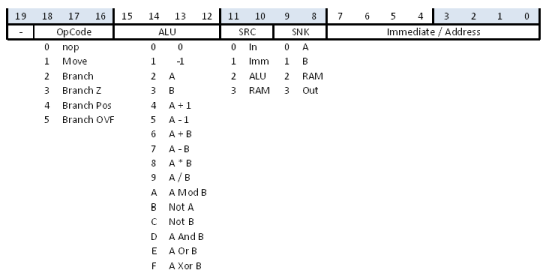 The Data_Multiplexer selects one of four 8-bit inputs and generates an 8-bit data output which can be used to load the Arithmetic_Unit, Read-Write_Memory, Output_Register and Program_Counter.

Data inputs to the multiplexer are In0-7 (Computer Input), IR0-7 (address field of the 20-bit instruction), ALU0-7 (Arithmetic Unit output), and RAM0-7 (output of the Read-Write Memory)

The Arithmetic_Unit has two input registers (A, B) and an  8-bit Arithmetic-Logic Unit (ALU8).

The ALU8 part supports a total of sixteen signed-integer-arithmetic and bitwise-logical operations.  It is similar to the 4-bit LS181 ALU, but ALU8 is an 8-bit part and additionally has multiply, divide and mod/remainder operators.  It has two 8-bit inputs, A and B, and a 4-bit function select (S) input.

Refer to Logic Parts Data for a full description of ALU8.

The Output_Register provides the output of the Computer.  It can be loaded under instruction control by any input to the Data Multiplexer.